For Saturday night action Matt Niskanen and the Philadelphia Flyers come to town to visit the Washington Capitals for the first time this season after playing their first two meetings in Philadelphia. After a very back and forth first period, the final five minutes of the period would provide us some scoring as Jonas Siegenthaler would be called for hooking and nine seconds later Sean Couturier would net his 14th of the season while on the powerplay to give the Flyers the 1-0 lead. However, the referees would call a bad penalty on goaltender Brian Elliott for tripping Lars Eller, who was cutting through the crease and Elliott was playing the puck so it shouldn’t have been a penalty, to give the Capitals the powerplay. On the powerplay the Capitals would need only 29 seconds as TJ Oshie would net his 20th of the season to tie the game at one.

In the second period the Capitals would have a very rough first five minutes to the period as they would hang Braden Holtby out to dry. as Michael Raffl and Couturier (second of the game) would score 14 seconds apart to take the 3-1 lead. Then James van Riemsdyk would do the last second tip right in front of Holtby to grow the Flyers lead to three. The Capitals would get three powerplay opportunities, albeit the first one on Couturier was very questionable as it should have been a cross checking call on Alex Ovechkin, but would not be able to do anything of note with any of them as the Flyers would take the 4-1 lead into the second intermission.

Then in the third period the Flyers would continue scoring as the Capitals would continue to struggle moving the puck and doing coverage in their own zone as Nicolas Aube-Kubel and Travis Konecny would both score to grow the Flyers lead to five. The Capitals would then put themselves into penalty problems which would lead to Claude Giroux scoring his 14th of the season and 800 career NHL point while on the two man advantage to force the Capitals to pull Holtby for Ilya Samsonov to finish the game. The Capitals would finally get back on the board as Evgeny Kuznetsov would get a trickler past Brian Elliott, and give Martin Fehervary his first career NHL assist and point. However, the Flyers would hold the Capitals at bay as they would go on to win 7-2. 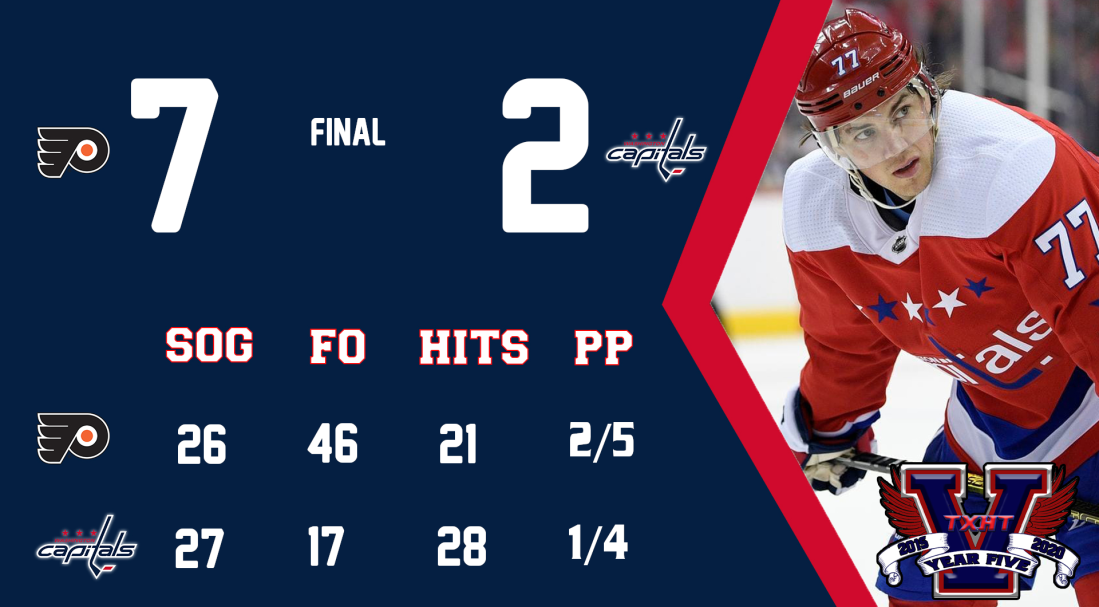