Tonight, the Washington Capitals are playing their 2nd game of this five game road trip. Riding a three-game win streak, the longest of the season thus far, the Capitals are definitely trending in the right direction. The Calgary Flames, however, after a hot 2018-19 season, are looking to find some consistency after dropping 3 of their last 6 games.

The Capitals defeated the Chicago Blackhawks in a 5-3 win on Sunday. The Blackhawks’ were unable to convert on even a single one of the five power plays they were gifted, including a four-minute stint. Just nine minutes into the contest, TJ Oshie scored his 7th goal, establishing an early Caps’ lead (NHL.com). Drake Caggiula would tie the game after a series of great saves by Braden Holtby overextended his abilities. A high-sticking penalty against Chandler Stephenson gave Chicago a four-minute power play, but it was Nic Dowd who scored a shorthanded goal that would re-establish the Caps’ lead. Alex Ovechkin would score his 6th goal of the season just under four minutes into the final frame. Back-to-back goals by the Hawks tied the game once again. However, less than 90 seconds later, Tom Wilson would ultimately score the game-winning goal for Washington. Lars Eller had quite the roller-coaster of a game. After a bad turnover which directly led to a Hawks goal by Patrick Kane, Eller tallied an assist on Tom Wilsons’ lead-reestablishing goal, and then would seal the deal with an empty net goal of his own. Braden Holtby was named the second star of the night, after a much-needed lights out performance. Despite being peppered by 44 total shots by the Hawks, Holtby stopped 41 of those, his best game thus far. He is expected to start for the Capitals tonight. Most impressive however is the Capitals special teams. Through their last three games, of which all three were wins, the Caps’ power play has scored on four of 10 opportunities, thus operating at 40% efficiency, and the penalty kill units have killed off 90% of the penalties the team has taken. 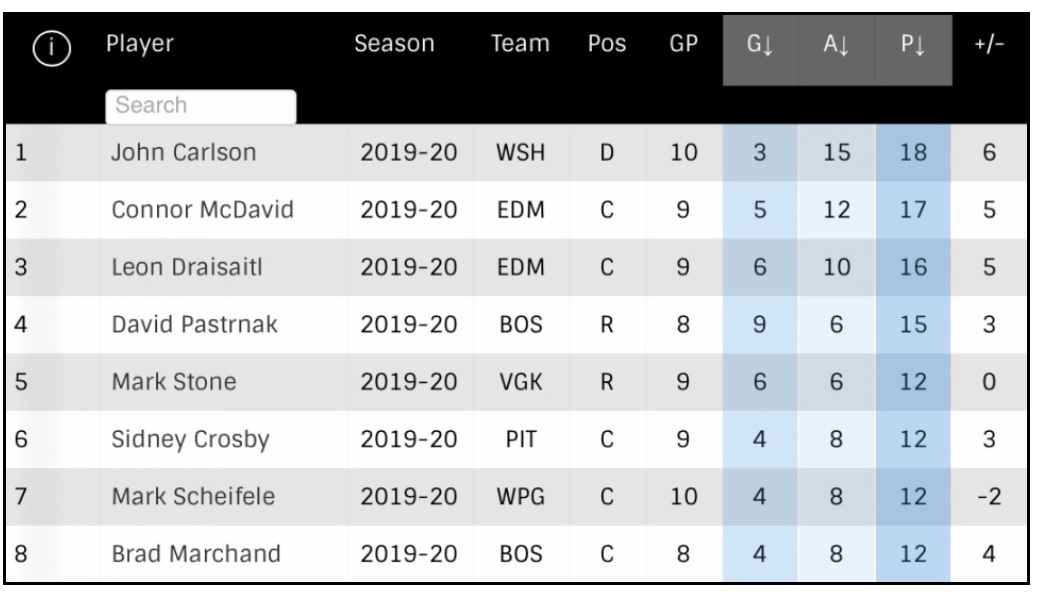 The Calgary Flames are struggling to find consistency and discipline through 10 games. They won their last game by a score of 2-1 versus the Anaheim Ducks. Goaltender Cam Talbot allowed just one goal on 30 shots (TheScore, CGY @ ANA). Michael Stone scored his first goal of the season, and Mikael Backlund his second just under nine minutes into the third period. Backlund’s goal would hold as the tie-breaking, game-winning-goal the Flames needed to hand Anaheim their first home loss of the season. They rank 31st in penalty minutes, averaging 12.9 per game. Their penalty kill is 6th in the league, operating at 86.5%, but their power play is only at 15.6% efficiency (TheScore, Calgary Flames). Johnny ‘Hockey’ Gaudreau has scored just 3 goals, after coming off a career-high 36 goals last season (Hockey Reference). He is, however tied with Matthew Tkachuk in leading the team in points with 8. Elias Lindholm has established his offensive abilities thus far, with 5 goals and 6 points, including two power play goals (TheScore, Elias Lindholm).

Coverage of the game begins at 8:00pm with Caps Faceoff Live, followed by Caps Pregame Live at 8:30pm, all on NBCSN/NBCSWA, with puck drop shortly after 9:00pm.