The Calgary Flames would register three shorthanded goals against the Arizona Coyotes in their 6-1 win last night.

The three shorthanded goals are tied for the most in franchise history.

Brayden Point would end the game with two goals.  He has 10 for the month of November and is tied for third place with 17 goals on the season.

Brayden Point ended the game with two goals, bringing his totals to 10 in November and 17 on the season – tied with @ovi8 and @pastrnak96 for third in the League. #NHLStats pic.twitter.com/pIoLVV7jHu

Nashville’s Austin Watson would register a hat trick in the contest over the Anaheim Ducks, with Nick Bonino and Craig Smith registering the other two goals from the Nashville Predators.

Los Angeles’ Matt Luff would be the fifth different rookie to have a four-goal streak or more in franchise history in the Los Angeles Kings 5-2 win last night.

Kings captain Anze Kopitar would factor on three of the teams’ goals for the 53rd time in his career and the first on the season.

Captain @AnzeKopitar factored on three @LAKings goals for his 53rd game with three or more points and first of the season. #NHLStats #EDMvsLAK pic.twitter.com/En4E8RDTrb

Kings Dustin Brown would also register a hat trick in the game as well.

There are five games on the NHL schedule today: 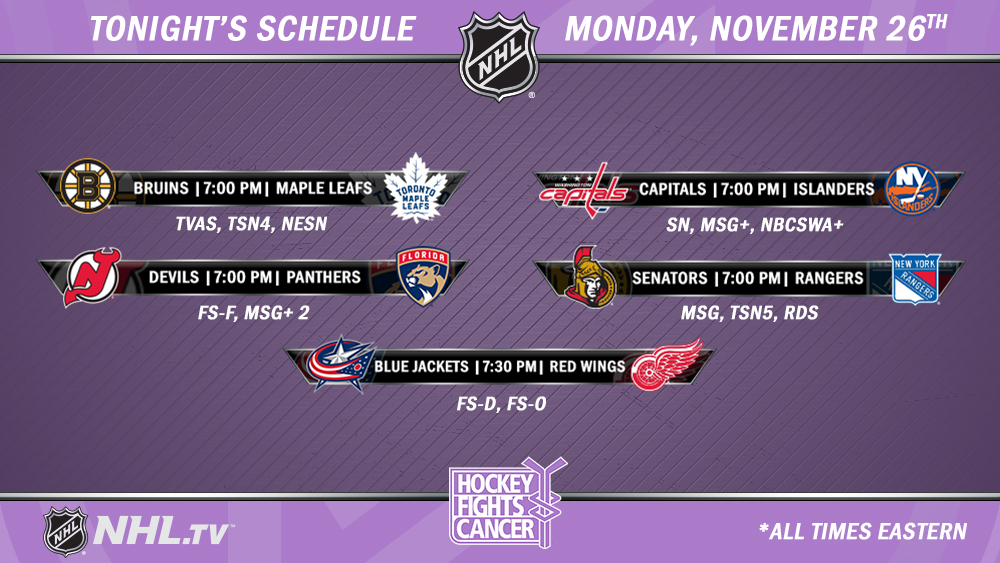 In the lone National Women’s Hockey League contest from the weekend, the Metropolitan Riveters faced off against the Connecticut Whale.

RECAP: WHAT. A. GAME. @audra_21 nets a hat trick as the @Riveters win in the shootout, 4-3, in an epic back-and-forth battle with the @CTWhale_NWHL.

Riveters’ Amanda Kessel would score in the shootout to help out with the victory.

Amanda Kessel scores in the shootout and Kimberly Sass makes all three saves as the @Riveters beat the @CTWhale_NWHL, 4-3! #METvsCTW #HockeyTwitter pic.twitter.com/z9TQb88YIK

TXHT’s Christopher Vasilas has your recap of the match-up between the Riveters and the Whale at the following page.

In a very shocking and surprising announcement, the Philadelphia Flyers announced that Executive Vice President and General Manager Ron Hextall has been fired.

Flyers President Paul Holmgren and Comcast Spectacor Chairman and CEO Dave Scott will have a press conference at 11:00am tomorrow (November 27th).

OFFICIAL: The Flyers organization has decided to relieve Ron Hextall of his duties as Executive Vice President and General Manager. https://t.co/W1tKRlqG5d pic.twitter.com/iiAvQlaZoH

Whoa, for those waiting for something in PHI to happen, it just did. https://t.co/xdMwmfKU3Z

TXHT has your thoughts and coverage on the news of Hextall’s firing at the following page.

The Winnipeg Jets announced that they will wear their Heritage jerseys for two games this season.  The jerseys will be available for purchase on Friday and will be worn on December 31st at the Edmonton Oilers and then again on the Winnipeg Jets Alumni Night on February 26th, 2019 when the Minnesota Wild visit Winnipeg.

#NHLJets will wear @adidashockey adizero Authentic Pro Heritage jerseys (available Friday) on Alumni Night. It will be the second of two appearances of the Heritage jersey this season, the other being at the Dec. 31 away game vs. the Oilers.

The NHL announced their Three Stars of the Week ending on November 25.

⭐⭐ Marc-Andre Fleury stopped 81 of the 83 shots he faced last week, incl. back-to-back shutouts Nov. 23-24. He leads the NHL with 5 shutouts this season – only 10 goaltenders since 1967-68 have collected as many through their team’s opening 25 games of a campaign. #NHLStats pic.twitter.com/dggSSGBE8G

In NWHL news, Audra Richards was named the VEDA NWHL Player of the Week.  Richards registered the first NWHL hat-trick of the season in the Metropolitan Riveters 4-3 shootout win yesterday.

The first hatty 🎩 of the season warrants @EcnVeda NWHL Player of the Week honors! @audra_21had all three of the @Riveters' regulation goals in a 4-3 win over the @CTWhale_NWHL yesterday!

You can watch TXHT Live this Wednesday at 8p EST on Facebook Live.