After falling flat to the Columbus Blue Jackets the other night, the Washington Capitals look to rebound against their Eastern Conference rival Boston Bruins. In the first 3-5 minutes of the game the Capitals would dominate the play, but it would be the Bruins striking first as David Pastrnak would score his 26th of the season to take the 1-0 lead. Then shortly after Tom Wilson would drop the gloves with Zdeno Chara, but Wilson would also receive a minor for cross checking to give the Bruins the first powerplay of the game. The Capitals would kill the penalty, but Jakub Vrana would be called for tripping to put the Bruins on another powerplay. While on their second powerplay it would look like Patrice Bergeron would net his 10th of the season for a two goal lead, but the Capitals would challenge for offsides, and it would be determined that Jake DeBrusk did enter the zone before the puck did so it would be ruled no goal. Then late in the period Joakim Nordstrom would get called for high sticking, and the Capitals would get to start the second period with an abbreviated powerplay.

In the second period the Capitals would fail to capitalize on the abbreviated powerplay, but they would force another one right away and TJ Oshie would force the play in the slot to get his own rebound to get the Capitals on the board with his 12th of the season. Then three minutes and 30 seconds later Oshie would split the Bruins defense and make some filthy moves to undress Jaroslav Halak to score his second of the game, and give the Capitals the 2-1 lead. The Capitals would get a late powerplay, and while they would get some very solid quality chances, they would not be able to capitalize on it as they would remain up by one heading into the intermission.

Then in the third period Sean Kuraly would tip is a Torey Krug point blast to to tie the game at two less than three minutes into the period, but The Capitals would roar back as John Carlson would net his 12th of the season to secure the Capitals the 3-2 victory. 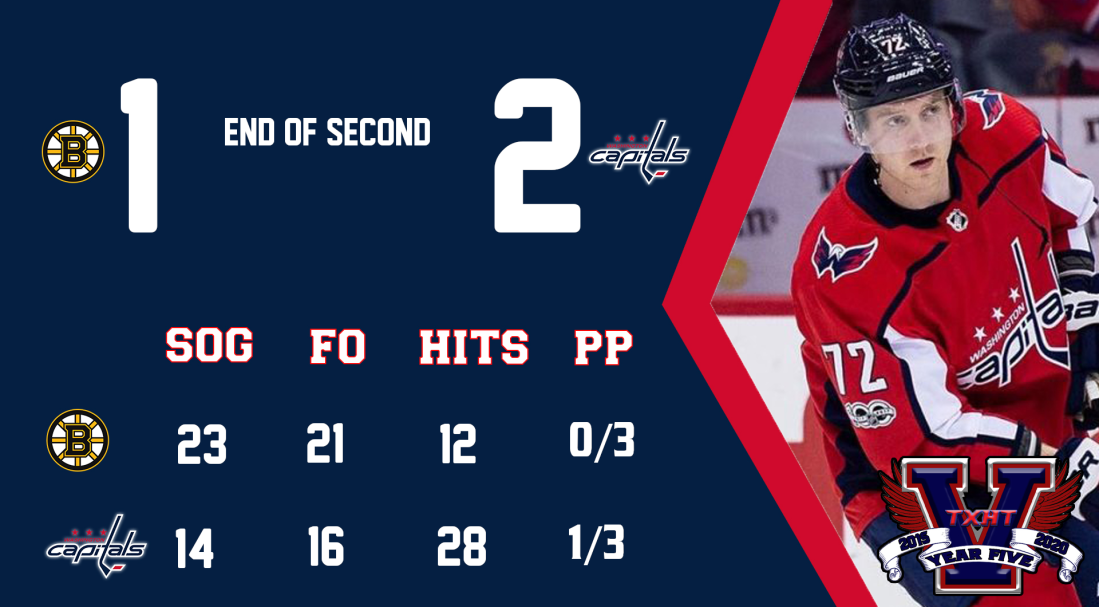