Coming into tonight’s game the Washington Capitals look to get back to their winning ways as they host an injury depleted Dallas Stars team that is still looking for their first win of the season. The Capitals would also be getting back superstar forward Evgeny Kuznetsov, who would score the first goal of the game to give the Capitals the 1-0 lead a little under five minutes into the game. Both teams would trade powerplay opportunites, but neither team would capitalize thus keeping the Capitals 1-0 lead intact going into the first intermission

In the second period it would be the Stars responding early as Roope Hintz would score his fourth of the season two minutes into the period to tie the game at one a piece. However, after another failed powerplay opportunity the Capitals would regain the lead when John Carlson would get a knuckler through the seven hole on Bishop to give the Capitals the 2-1 lead. The Capitals would get a late powerplay, but were unable to capitalize before time expired in the period.

In the third period the Stars would dominate the Capitals during the first half of the period and would score as a result when Alexander Radulov would deflect an Esa Lindell shot past Braden Holtby to tie the game at two. Then about six minutes later Nick Caamano would push the puck past Holtby to give the Stars their first lead of the game at 3-2. With 30 seconds left in the period with Holtby pulled Nicklas Backstrom would tap in a loose puck in the crease to tie the game at three and send the game into overtime. However, 43 seconds into overtime the Stars would clinch their first victory of the 2019-20 season as Tyler Seguin would score to make it a 4-3 victory for the Stars. 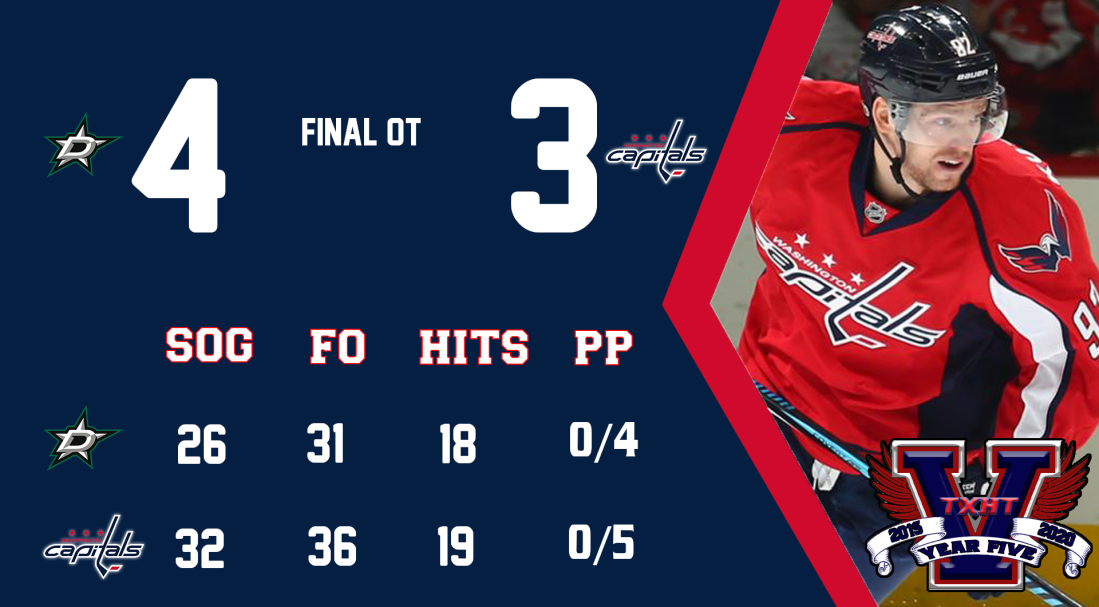