There were three Stanley Cup playoffs games  in action yesterday.  All the recaps are written by TXHT’s staff. 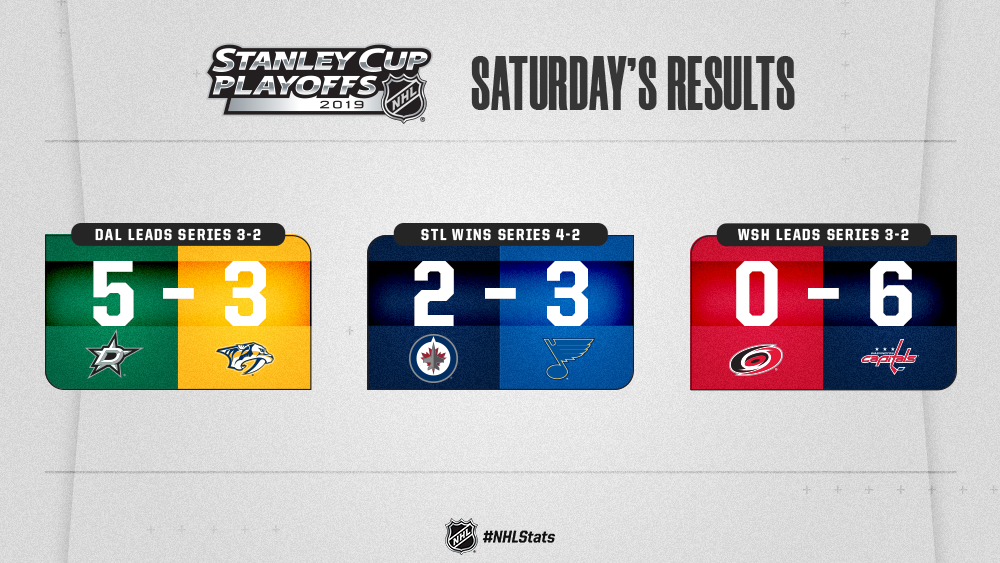 The Dallas Stars are one win away from advancing to the second round after they defeated the Nashville Predators yesterday by the score of 5-3.

Dickson Kendrick has your recap of the contest between Dallas and Nashville which you can read here or at the link below.

Gameday Recap: Nashville Predators vs. Dallas Stars (First Round: Game 5)#GoStars down the #Preds with a 5-3 win and will look to clinch the series on Monday night. #StanleyCuphttps://t.co/i1bPF7Z41R

The St. Louis Blues defeated the Winnipeg Jets by the score of 3-2 and have advanced to the second round of the Stanley Cup playoffs.  The Blues await the winner of the series between the Predators and Stars.

Aryan Weisenfeld has your recap of the contest between the Blues and Jets here or at the link below.

Winnipeg Jets vs St. Louis Blues – Game 5 Recap#stlblues pound the #GoJetsGo in the first two periods and then hold onto a 3-2 for the win and the series. #StanleyCuphttps://t.co/k27NdeUIiH

The Washington Capitals crushed the Carolina Hurricanes last night with a 6-0 win and are one win away from facing off against the NY Islanders in the second round.

Michael Lindenbaum was live from the contest between the Capitals and the Hurricanes and you can read the recap of the contest here or at the link posted below.

The #ALLCAPS special teams dominated #TakeWarning in a 6-0 victory to reclaim the series lead. #StanleyCuphttps://t.co/akjaP7RSq4

There are two contests taking place today in Stanley Cup playoff action with the Toronto Maple Leafs and Vegas Golden Knights looking to advance to the second round.

The @MapleLeafs and @GoldenKnights can advance past the opening round with a Game 6 win on Sunday.

For more news, notes, information, and stats, you can check out the NHL’s Morning Skate report posted below.

You can catch up on all of TXHT’s 2019 Stanley Cup playoff coverage by clicking here.