Today is Friday, April 19th, 2019, and these are your news and notes covering yesterday’s contests.

There were three contests in Stanley Cup playoff action yesterday and the recaps are written by the TXHT staff. 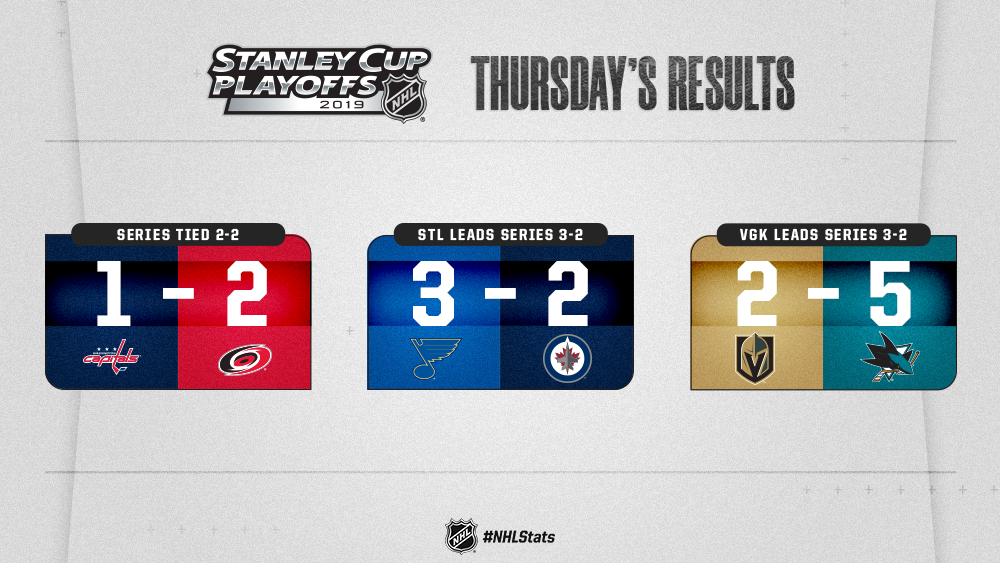 The Carolina Hurricanes defeated the Washington Capitals by the score of 2-1 last night to tie their series at 2-2.  Both teams will look to take the 3-2 series lead when Game 5 takes place tomorrow night (April 20th) at Capital One Arena.

You can find the recap of yesterday’s contest here or at the tweet below.

The St. Louis Blues would come back after being down 2-0 to defeat the Winnipeg Jets by the score of 3-2, to take the lead in the series.  The Blues will look to advance to the second round when Game 6 of this series takes place tomorrow night (April 20th) at Enterprise Center in St. Louis.

You can find the recap of last night’s contest between the Jets and the Blues here or at the tweet posted below.

The #SJSharks staved off elimination as the defeat #VegasBorn 5-2. Sharks would get 2 goals from Tomas Hertl, a 3 assist game from Erik Karlsson, and a 2 point game from Joe Pavelski (1g, 1a) in the victory. #StanleyCup pic.twitter.com/GvtZxyISHr

Today there are only two games in Stanley Cup playoff action…

The Colorado Avalanche look to advance to the second round in their series and either the Boston Bruins or Toronto Maple Leafs will take the 3-2 series lead.

The @Avalanche look to advance while the @NHLBruins or @MapleLeafs aim to take a commanding 3-2 lead in their best-of-seven First Round series on Friday.

Don’t forget to check out all of THXT’s 2019 Stanley Cup playoff action here.