There were four contests in NHL action yesterday and TXHT has all of your recaps for those contests. 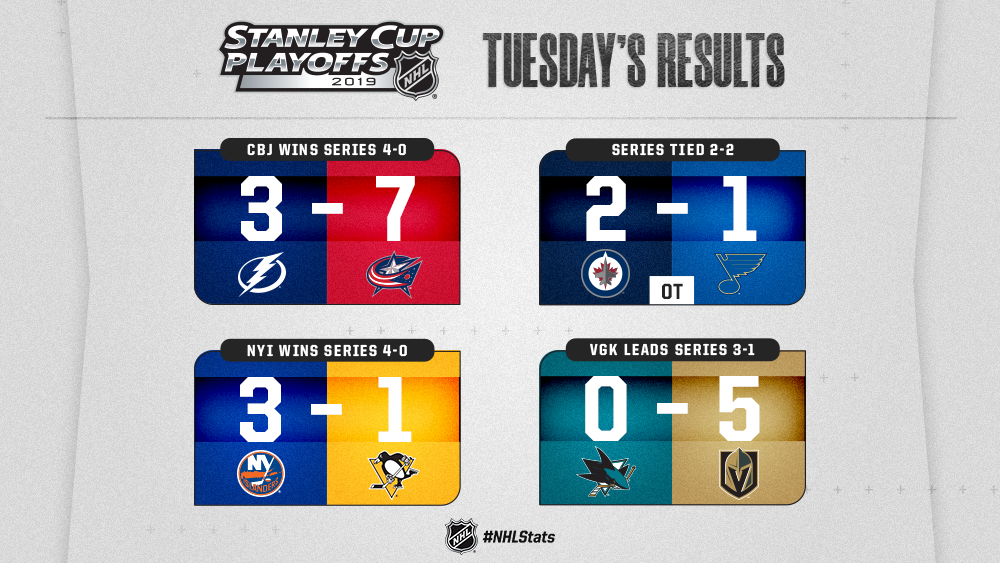 The Columbus Blue Jackets defeated the Tampa Bay Lightning yesterday with the 7-3 win.

Dickson Kendrick has your full recap of the contest between Columbus and Tampa Bay at the link below.

The #CBJ take down the #GoBolts with a 7-3 win and now advance to face the winner of the #NHLBruins v. #LeafsForever series. #StanleyCuphttps://t.co/FZuXUVP6g6

Last team to clinch a postseason berth and first to advance to the Second Round. The @BlueJacketsNHL became the first team to sweep the Presidents’ Trophy winner in the opening round. #NHLStats #StanleyCup pic.twitter.com/UEpDJ53QbQ

The NY Islanders defeated the Pittsburgh Penguins by the score of 3-1 and in doing so won this series and advance to the second round of the Stanley Cup playoffs.

Chris Vasilas has your full recap of the contest between the Islanders and the Penguins at the link below.

The #Isles complete the sweep against the #LetsGoPens with a 3-1 win featuring goals from Jordan Eberle, Brick Nelson, and Josh Bailey. #StanleyCuphttps://t.co/4Iy2feiQZc

The NY Islanders advance to the second round of the Stanley Cup playoffs and await the winner between the Washington Capitals and the Carolina Hurricanes.

The @NYIslanders are moving on to the Second Round after sweeping a best-of-seven series for the seventh time in franchise history and first in 36 years after doing so vs. the Wayne Gretzky-led Oilers in the 1983 #StanleyCup Final. #NHLStats pic.twitter.com/GlWvPZaXnh

The Winnipeg Jets tied their series with the St. Louis Blues with a 2-1 win in overtime.  Winnipeg will look to take the 3-2 series lead when Game 5 shifts back to Winnipeg.

Aryan Weisenfeld has your recap of the contest between the Winnipeg Jets and the St. Louis Blues at the link below.

#VegasBorn comes out of the gates quickly again as Max Pacioretty scores 2 goals and 2 assists in 5-0 shutout of the #SJSharks to take a commanding 3-1 lead in their #StanleyCup first round series. pic.twitter.com/AnH41qk9Ev

Today there are three games on the Stanley Cup Playoff schedule

The @MapleLeafs, @PredsNHL and @Avalanche each look to take a 3-1 lead in their series on Wednesday night. #StanleyCup

For more news, notes, information, and stats, you can check out the NHL’s Morning Skate report here.

You can check out all of TXHT’s 2019 Stanley Cup playoff coverage here.