There were 11 NHL contests yesterday 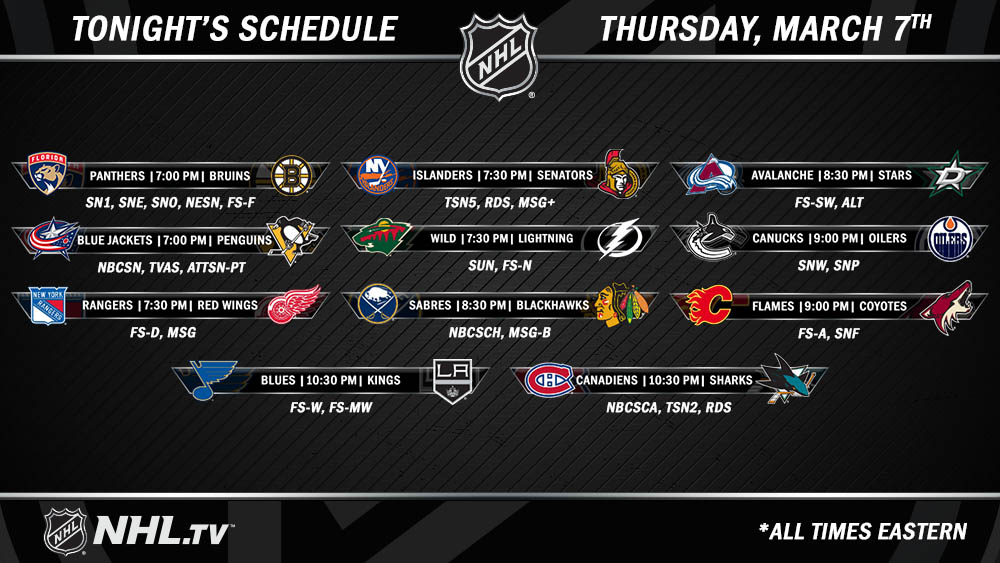 *Image is the property of the NHL, NHL Public Relations and their respective owners

The Boston Bruins would sneak past the Florida Panthers with a 4-3 win last night.  Boston’s Patrice Bergeron would score twice in the contest and Brad Marchand would have a three assist night.  With Boston’s win, they would go on to extend their point streak to 18 contests.

"Special group for sure. It's in our DNA now that we just don't give up. We go about our business and just battle until the end."

Boston’s goaltender Tuukka Rask would go on to have a 22 save performance in the contest. 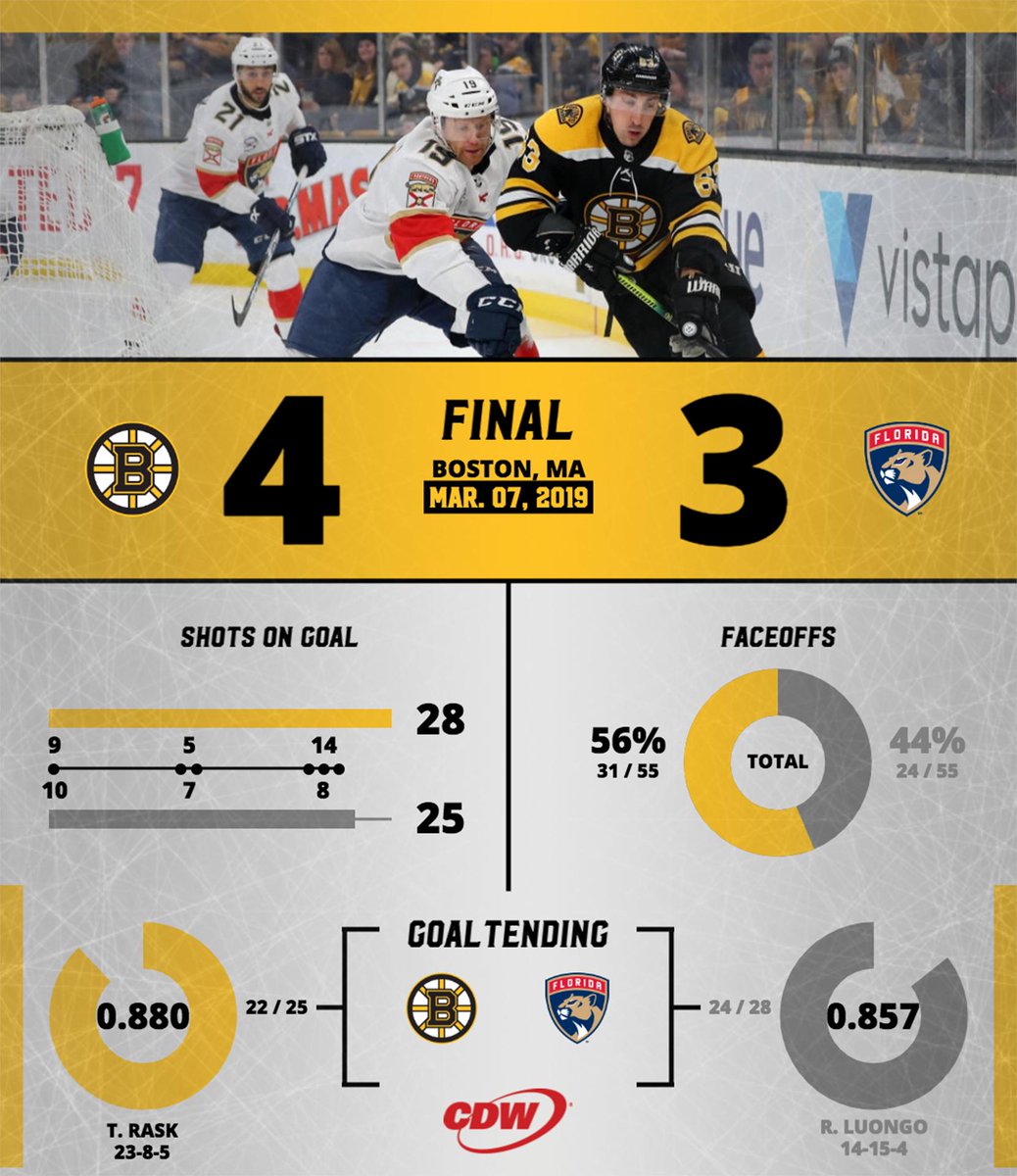 *Image is the property of the Boston Bruins, NHL, NHL Public Relations, and their respective owners

The Pittsburgh Penguins would go on to shutout the Columbus Blue Jackets last night with the 3-0 win.

*Image is the property of the Pittsburgh Penguins, NHL, NHL Public Relations, and their respective owners

The New York Islanders would go on to double up the Ottawa Senators with the 4-2 win and Valtteri Filppula would go on to have two goals in the contest for the Islanders.

With the win, the Islanders would go on to get the sweep in the home-and-home series against the Senators.

For the Rangers, Pavel Buchnevich would score what would be the two goals in the contest.

The Minnesota Wild would cool off the white-hot Tampa Bay Lightning with the 3-0 win.  Minnesota’s Jason Zucker would score the only goals in the contest.

With the lone goals scored by Zucker, he would be only the second player in franchise history and the 23rd in League history to not only have at least three goals that were the only goals in the contest but the team would also register a shutout as well.

Per NHL Stats, tonight marked the 23rd time in NHL history, and second time in #mnwild history (both by @Jason_Zucker16), that a player scored 3+ goals in a game, they were the only goals for his team, and his team earned a shutout @PR_NHL

The Chicago Blackhawks would go on to register the 5-4 shootout win against the Buffalo Sabres.

That's all she wrote! The #Blackhawks defeat the Sabres in the shootout at home!#CHIvsBUF pic.twitter.com/ouySfewPrR

The shootout decides it; we fall to the Blackhawks. pic.twitter.com/rmx27ZdoRI

This game had it all. The Stars win their fourth in a row, Bish gets a shutout in back-to-back games and Radulov notches his first career hat trick. #GoStars pic.twitter.com/yrWhKsggP5

The Edmonton Oilers would go on to sneak past the Vancouver Canucks with the 3-2 win last night.

Edmonton’s Alex Chiasson, Zack Kassian, and Ryan Nugent-Hopkins would go on to score the goals for the Oilers in the contest.

Kass scored his fourth in as many games, RNH set a career-high in points & both McDavid & Drai extended their point streaks in tonight's BIG win over Van. https://t.co/VmN3O2VNDk

Vancouver’s Jay Beagle would go on to snap his scoreless streak in the contest with his third goal on the season late in the second period.  Alexander Edler would also go on to register a goal in the third period but that would not be enough to tie up the game.

The Arizona Coyotes would go on to blank the Calgary Flames last night and with the win, the Coyotes would move to a record of 33-29-5. 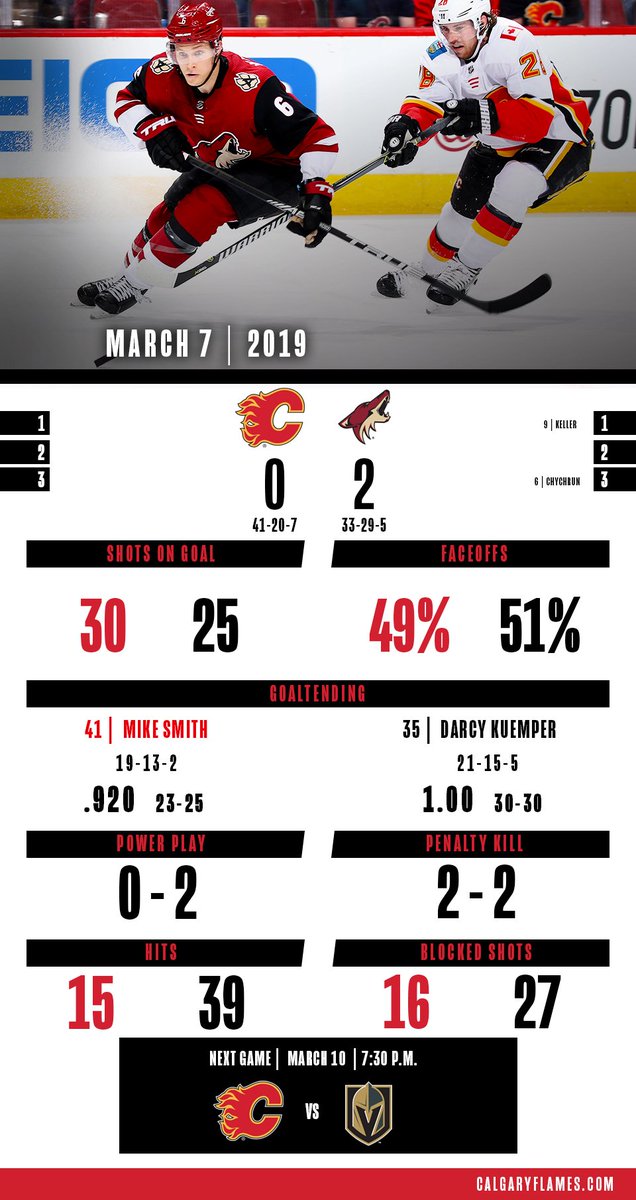 *Image is the property of the Calgary Flames, NHL, NHL Public Relations, and their respective owners

The St. Louis Blues would go on to record their fifth shutout in the past twelve contests and the NHL-best ninth shutout on the season as they would go on to blank the Los Angeles Kings by the score of 4-0.

San Jose Sharks defenceman Brent Burns would go on to record his 60th assist on the season, and joins three other players to have at least 60 assists at the age of 33 or older.

Brent Burns is the second defenseman in NHL history to record his first 60-assist season at the age of 33 or older, joining Nicklas Lidstrom (35 years, 355 days). #NHLStats pic.twitter.com/dosnF95fy3 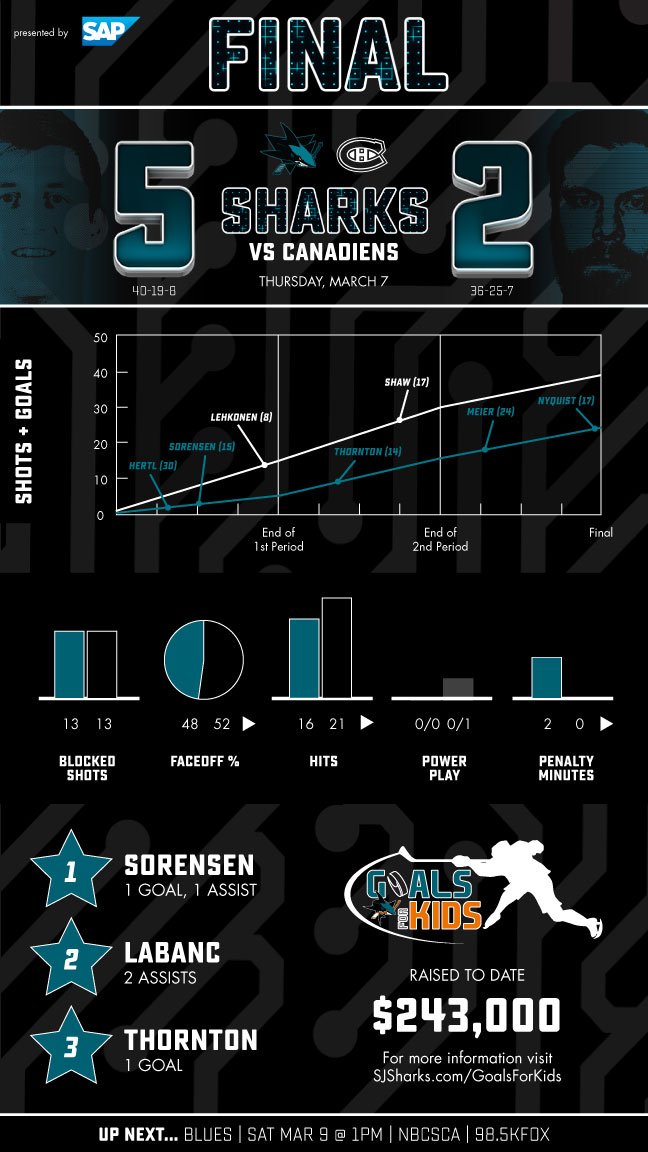 For the Montreal Canadiens, Andrew Shaw and Artturi Lehkonen would score the only goals, despite out shooting the Sharks in this contest. 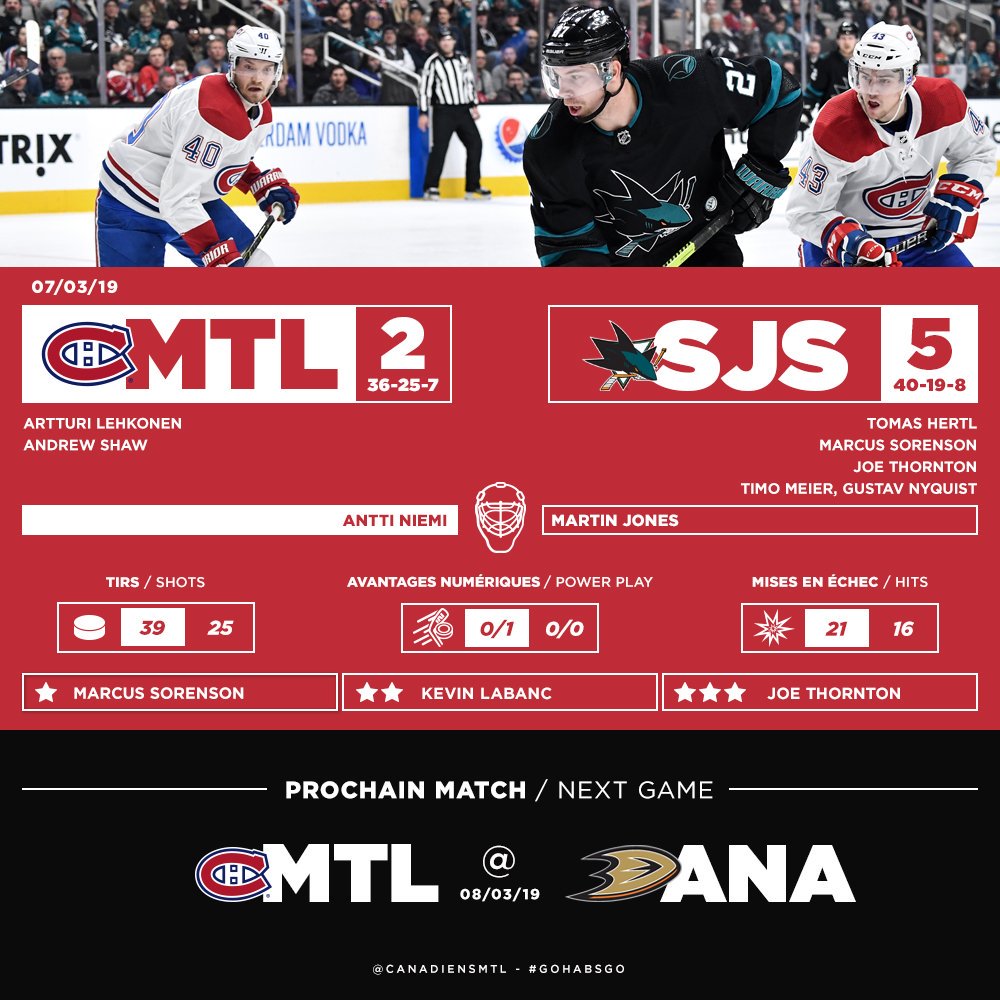 *Image in the property of the Montreal Canadiens, NHL, NHL Public Relations, and their respective owners 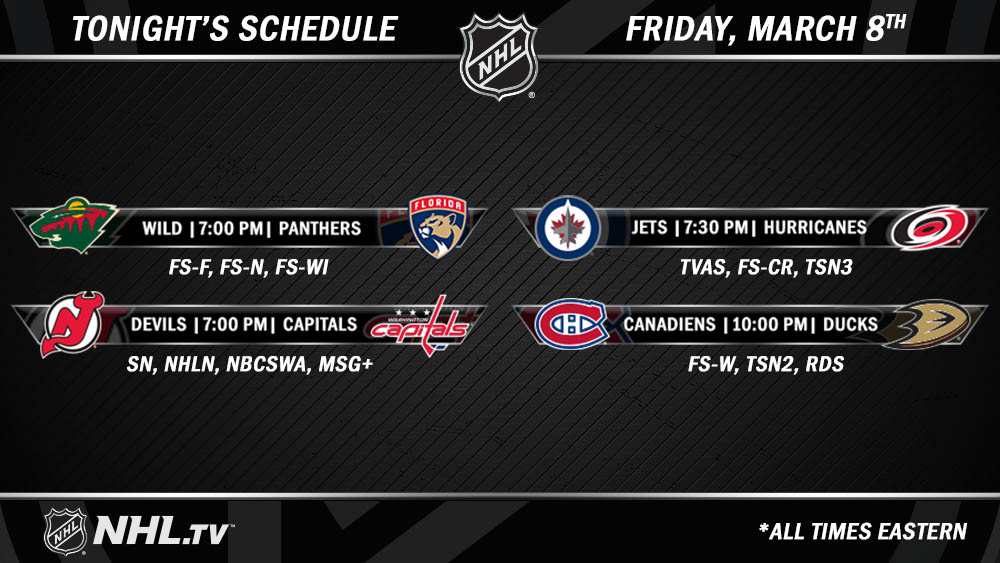 Last night in the 2019 NWHL’s Isobel Cup Playoffs Play-in game, the Metropolitan Riveters would take on the Connecticut Whale and would come out with the 5-2 win.

The contest would be fast-paced in the first period, with the game being tied a 2-2.  The second period in the contest would be filled with penalties and neither team would take advantage of the extra skater.  The third period would start out slow until Riveters Audra Richards would end up scoring what would be the game winner at the 2:35 mark.  There would not be another goal scored until toward the end of the period when Alexa Grushow would score her second goal in the contest and then with 16 seconds left, Audra Richards would score an empty net goal.

TXHT’s Christopher Vasilas has your full recap of the contest between the Connecticut Whale and Metropolitan Riveters at the following page.

In the #NWHL Playoff Play In game it would be the @Riveters defeating the @CTWhale_NWHL 5-2 to advance to the semifinals on Sunday against the @WhitecapsHockey. #WomensHockeyhttps://t.co/L0gJkwPQXf