Today is Wednesday, February 20th, 2019, and these are your news and notes.

There were nine contests yesterday in NHL action.

If you're ready for some hockey, raise your hand. 🙋‍♂️https://t.co/ZPpY6ogjMY pic.twitter.com/EPCLZICKnU

The Florida Panthers would take on the Buffalo Sabres and would come away with the 4-2 win.  Florida’s Jonathan Huberdeau would score twice for the Panthers in this contest.

And that's all she wrote. pic.twitter.com/BZoTVxG68w

The Pittsburgh Penguins would take on the New Jersey Devils and there would be four different scorers for the Penguins in this contest.

For the Devils, Patrick Warburton brought back his Puck Daddy character in a pre-game ceremony for New Jersey  with the ceremonial puck drop.

The Tampa Bay Lightning would take on the Philadelphia Flyers and would come away with the decisive 5-2 win at Wells Fargo Center last night.

The New York Rangers would defeat the Carolina Hurricanes thanks to scoring two goals after being down 1-0 in Raleigh last night.

#NYR close out the road trip with a win!!! pic.twitter.com/ixra7F0pAA

There would be three different scorers for the Montreal Canadiens as they would take down the Columbus Blue Jackets with a 3-2 win in Montreal last night.

After missing the last six games, Paul Byron was back to play the 400th game of his NHL career.#GoHabsGo pic.twitter.com/REXi5ObKVP

The St. Louis Blues would mount a comeback and defeat the Toronto Maple Leafs with the 3-2 in the overtime frame.

TXHT’s Steve Gardiner has your full recap of the contest between the St. Louis Blues and the Toronto Maple Leafs at the following page.

Toronto Maple Leafs vs St. Louis Blues – 20/2/2019 – Game Recap#LeafsForever comeback in the 3rd period to gain a point in overtime against the #Blues https://t.co/7FkKiUGlum pic.twitter.com/jGvJ7xqgSC

The Anaheim Ducks would have another big win, getting a shutout against the Minnesota Wild.  The Ducks would take down the Wild 4-0.  Ryan Miller would get another shutout win and would add to his career win total after setting the NHL record for all-time wins by a U.S.-born goaltender on Sunday night.

Getting wild in Minnesota!

Arizona’s Vinnie Hinostroza would seal the win for the Coyotes with the lone goal in the shootout frame.

"I thought we played a great game for 60 minutes. I think we controlled most of the game." – @Hinostroza12 #ARIvsEDM Recap: https://t.co/V0xkig6QDG

There are four contests on the NHL schedule tonight… 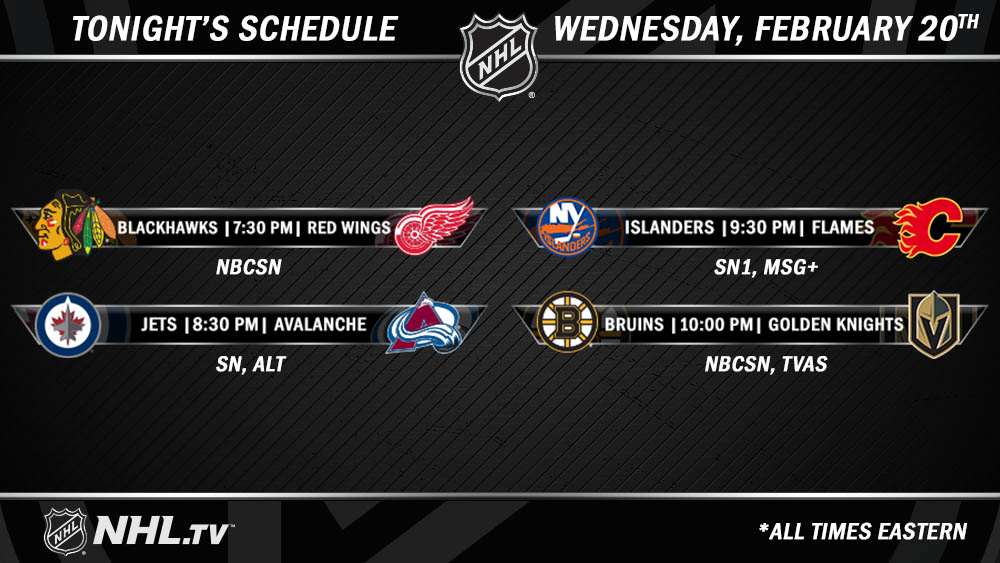 The Toronto Maple Leafs yesterday would release the throwbacks that they will wear on March 15th and March 16th.  The throwbacks worn will be the white Toronto St. Pats jersey worn in the 1920s.  These jerseys are similar to the ones that were worn for a game back in March 2017.

The @MapleLeafs honoring their history with these 🔥 throwbacks by @adidashockey! pic.twitter.com/6L2p41oqa8

We’ll be wearing these St. Pats throwback threads on March 15 & 16.

The jerseys are available for pre-order through the Toronto Maple Leafs team store at this link.

Saturday is all about you, #Beauts fans!