Today is Monday, February 4th, 2019, and these are your news and notes from yesterday.

There were only three games on the NHL slate yesterday. 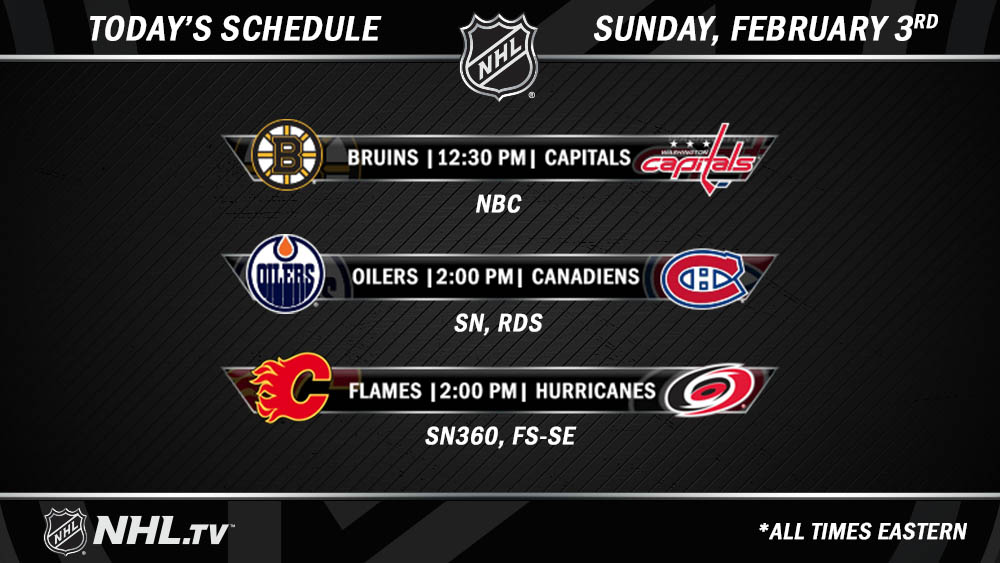 TXHT has your full recap of the contest between the Boston Bruins and the Washington Capitals at the following page.

There would be four different scorers for the Montreal Canadiens in this contest against the Edmonton Oilers and would win this contest 4-3 in the overtime frame.

The Canadiens now have an 8-1-2 record against Canadian teams on Super Bowl weekends.#GoHabsGo pic.twitter.com/kYH45SovnY

Edmonton would end the weekend of games with overtime heartbreakers, including losing in overtime in this contest to the Canadiens.

It was déjà vu for the #Oilers in Montreal on Sunday as they settled for their second straight single point with a second straight overtime heartbreaker. https://t.co/VYdCCxMyCq

There will be four games taking place on the NHL schedule tonight.

To recap from this weekend’s slate of NWHL contests…

RECAP: The @BuffaloBeauts pick up their fifth straight win in a 3-2 battle with the @Riveters in the Rivs' #YouCanPlay Game!

The Buffalo Beauts faced off against the Metropolitan Riveters in the NWHL Twitter Game of the Week and would come away with the 3-2 win to notch their fifth straight win.  With the win, the Buffalo Beauts moved to a record of 9-4-0 on the season.

This would be the first game for the Beauts at RWJBarnabas Health Hockey House since the Isobel Cup final last season, when they would fall to the Riveters 1-0.

Both teams’ top lines were held at bay throughout the contest as the Beauts got goals from Taylor Accursi, Julianna Iafallo and Savannah Harmon.

For the Riveters’, their third line produced with Rebecca Morse and Kristin Lewicki each scoring their first goals of the season with Alexa Aramburu picking up the assists on both of the goals.

The Beauts will next have NWHL action against the Metropolitan Riveters on February 23rd.

The Whale’s next NWHL contest will be on Sunday, February 24th against the Boston Pride.

RECAP: @TheBostonPride pick up a 3-1 win over the @CTWhale_NWHL in front of another sold-out crowd!

For the Pride, Jillian Dempsey and Denisa Krizova would both have a goal and assist in this contest.  Dempsey leads all Boston Pride skaters with nine goals on the season and is second in the league.

Boston would get on the board just 1:20 into the game with Krizova scoring the goal.

Connecticut’s Rachael Ade would score to tie the game 1-1 with 55 seconds left in the first period.  That would be Ade’s first career NWHL goal.

Dempsey would score her ninth goal of the season with her goal less than two minutes into the second period.  Throughout most of the third period, the Whale would spend this time on the penalty kill.  Toni Ann Milano would take advantage of a good rebound of the puck, sealing the 3-1 win for the Boston Pride.

For a full breakdown of the contest, TXHT’s Chris Vasilas has your recap at the following page.

Here is my recap of tonight's #Whale game against the #Pride.

Next weekend will be the #NWHLAllStarGame in Nashville, TN.
I WILL BE THERE, COME SAY HI!!

The next game the Whale play will be against the Pride in Stamford, CT on 2/24.https://t.co/nBa2GUhF5C#womenshockey https://t.co/cZr0mZsw8L

The NWHL All-Star Game will commence next weekend in Nashville, Tennessee with the resumption of the NWHL schedule on Monday, February 18th, with the Boston Pride taking on the Metropolitan Riveters in a make-up contest that was postponed due to inclement weather.