The NHL announced the Three Stars of the Week for the week ending January 13th, 2019 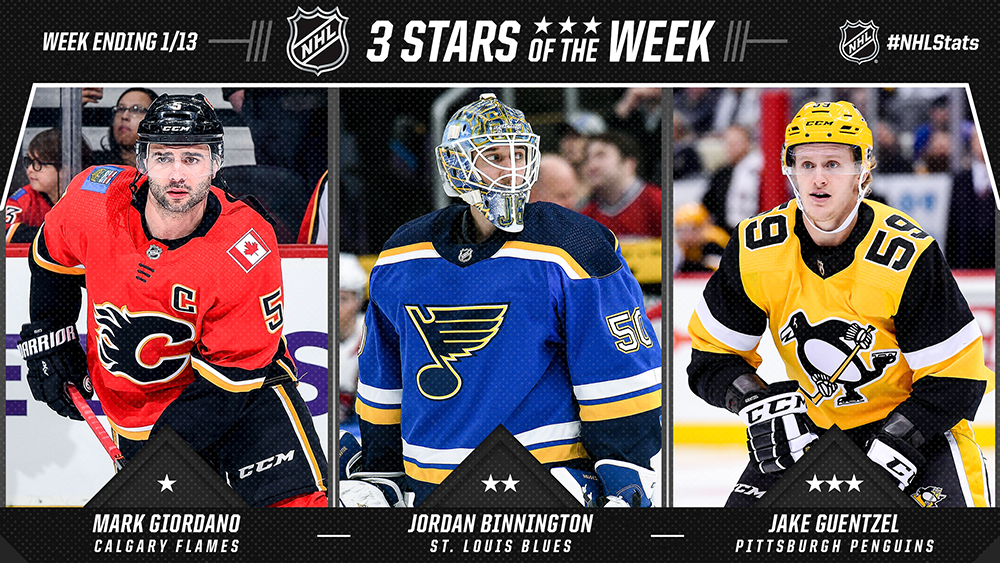 The First Star of the week went to Calgary Flames defenceman Mark Giordano.

⭐@MarkGio05 led the NHL with 8 points in 4 GP to power the Western Conference-leading @NHLFlames to a perfect week. He collected at least one point in all 4 games, including 2-1—3 in his 800th NHL game Sunday. #NHLStats pic.twitter.com/TvklHd7Sj3

Giordano had an eight point week (three goals and five assists) over a four game period.

Calgary would also have a perfect week for the now Western Conference leading Flames.  Giordano would have a three assist night (third on the season and fifth in his career) in the Flames 5-3 win over the Avalanche on January 9th.

In a contest that took place last night, Giordano would play in his 800th NHL career game, Giordano would score twice and have an assist and help the Flames rout the Arizona Coyotes 7-1.

Giordano has 47 points in 45 games played this season, had a rating of +7 on the week and has a rating of +36 on the season, the best for all players in the NHL.

⭐⭐@binnnasty stopped 74 of 76 shots he faced last week to win each of his first three career starts.

With a 25-save shutout Jan. 7, he became the 35th goalie in League history to post a shutout in his first NHL start and the second to achieve the feat with St. Louis. #NHLStats pic.twitter.com/GUISH4pEBS

Binnington in three games played this week stopped 74 of the 76 shots he faced and would finish the week with a perfect record of 3-0-0.

The Third Star of the Week would go to Pittsburgh Penguins forward Jake Guentzel.

Jake Guentzel would have five goals in three games and help the Pittsburgh Penguins get two victories which included their 10th win in the past 12 for a record of (10-2-0).

Guentzel had one assist in the 5-1 the Penguins had over the Florida Panthers on January 8th.  He also recorded a hat trick in the Penguins 7-4 win over the Anaheim Ducks, which would also be the second on the season.  Guentzel would close out the week scoring both of the Penguins goals in the 5-2 loss to the Los Angeles Kings on January 12th.

Guentzel leads all scores on the Penguins with 23 goals in 45 games played. In the past six contests, he has seven goals and three assists.

The NWHL announced today that Minnesota Whitecaps forward Amy Menke has been named the NWHL Player of the Week presented by VEDA.

Menke had two goals and three assists between the two contests for the Whitecaps over the weekend.  First in Minnesota’s 5-4 loss to the Boston Pride on Saturday night, Menke would have one goal and assisted on a goal scored by Kendall Coyne Schofield.  Menke in the Whitecaps 4-1 win over the Connecticut Whale yesterday had one goal and two assists in the first period. Menke’s second goal of the weekend would come in the second period.  Menke currently has seven points (4-3-7) in her first NWHL season.

Have a weekend, @AmyMenke! She recorded 2️⃣🚨,3️⃣🍎 in two games for @WhitecapsHockey to earn @vedaecn Player of the Week honors!