Today is Wednesday, January 9th, 2019, and these are your news and notes.

Yesterday there were 11 games in action.

Boston Bruins goaltender Tuukka Rask would register his 250th career win as well as his 42nd career shutout.  Rask is two wins shy of tying the franchise record for wins by a goaltender, currently held by Tiny Thompson.

Tuukka Rask recorded his 250th career win and 42nd career shutout, second in @NHLBruins history in both categories behind Tiny Thompson (252 W and 74 SO). #NHLStats pic.twitter.com/ysa1ElSGCC

There would be four different goal scorers for the Carolina Hurricanes in their 4-3 win over the New York Islanders last night.

Some numbers from the WIN 👇 pic.twitter.com/17MlcF6F3N

The Pittsburgh Penguins would end up scoring two shorthanded goals in this contest  in the second period en route to a 5-1 win over the Florida Panthers last night.

The @penguins are the ninth different team in 2018-19 to score multiple shorthanded goals this season. #NHLStats #FLAvsPIT

Penguins C Sidney Crosby would score his 20th goal on the season and with that goal, Crosby has scored at least 20 goals in 12 seasons on his career.

Nifty fact: Sidney Crosby now has 20 goals for the 12th time in his career, tying Mario Lemieux for most 20 goal seasons in franchise history. pic.twitter.com/itlri0oQU4

Florida’s Aaron Ekblad would score the lone goal for the Panthers and when he did, he would become the top goal scorer among defenceman in Panthers history.

Aaron Ekblad is now the @FlaPanthers franchise leader in goals by a defenseman. #NHLStats pic.twitter.com/ZNenpMLTww

With Montreal’s 3-2 win over the Detroit Red Wings last night, this would mark the second straight win for the Canadiens over the Red Wings.

The Canadiens won their second straight game over the Red Wings this season.

The Habs' three goals were each scored in the first two minutes of the periods in which they were scored.#GoHabsGo pic.twitter.com/qxBxToDp7j

Tampa Bay’s Nikita Kucherov would become the first player to reach 70 points in the first 43 games of a season since Jaromir Jagr in the 1999-2000 season, who did that in 38 games played.

Prior to Kucherov, the fewest team games required by a @TBLightning player to hit 70 points was 53 (Martin St. Louis in 2006-07). pic.twitter.com/jQPvFJgY7i

The Washington Capitals would go on to defeat the Philadelphia Flyers 5-3 to notch their first win at home in the year 2019.

What a rollercoaster of a finish!#CapsFlyers FINAL SCORE powered by @Alarmdotcom : #Caps 5 – Flyers 3 #ALLCAPS pic.twitter.com/ERaOpCQcCX

Between both teams, there would be the 27th instance in League history when the Capitals and Flyers would score two goals in four seconds or less.

The @Capitals and @NHLFlyers marked the 27th instance in NHL history in which two teams combined for two goals in a span of four seconds or less. https://t.co/SKUFKDwyJ3 #NHLStats #PHIvsWSH pic.twitter.com/sgGTisEJ7V

TJ Oshie would register his 200th NHL goal in this contest when he scored at the 9:19 mark in the second period.

TXHT has your full recap of the contest between the Philadelphia Flyers and the Washington Capitals at the following page.

Stars Tyler Seguin would score two goals and goaltender Ben Bishop would have 26 saves in the contest as they would take down the St. Louis Blues by the score of 3-1.

Dallas’ Miro Heiskanen registered his 20th point on the season in the contest and marked the fifth time in the past six seasons in which multiple teenage defenceman have had at least 20+ points in a season.

Miro Heiskanen recorded his 20th point of the year Tuesday. The 2018-19 season marked the fifth time in the past six campaigns in which multiple teenage defenseman have recorded 20+ points in a single season. #NHLStats #DALvsSTL pic.twitter.com/CPxbNykrnz

Despite outshooting the Stars 27-17, St. Louis would not be able to mount the comeback.

The #stlblues outshoot Dallas 27-17 but fall to the Stars. pic.twitter.com/LAignITLSQ

In the Winnipeg Jets 7-4 win, there would be seven different goal scorers in the contest.

Vegas Golden Knights goaltender Marc-Andre Fleury would get the win for the Golden Knights, who went on to win their seventh straight contest.

even if you watched it, read it anyway 🙃https://t.co/BxTeilJSdk

Fleury has not had a regulation loss in his last 12 games played and has posted a 9-0-3 record.

Erik Karlsson became the 13th different defenseman in NHL history – and sixth since 1990-91 – to record at least one point in 14 or more consecutive appearances within a season. #NHLStats pic.twitter.com/bp7QItAbLP

The @SanJoseSharks account for two of the five NHL defensemen with 40+ points in 2018-19.

This marks the third season in franchise history that San Jose has had multiple 40-point blueliners. The others:
2008-09: Boyle, Blake & Ehrhoff
1993-94: Ozolinsh & Norton#NHLStats pic.twitter.com/jq25J4qETS

Today there are three games on the NHL schedule 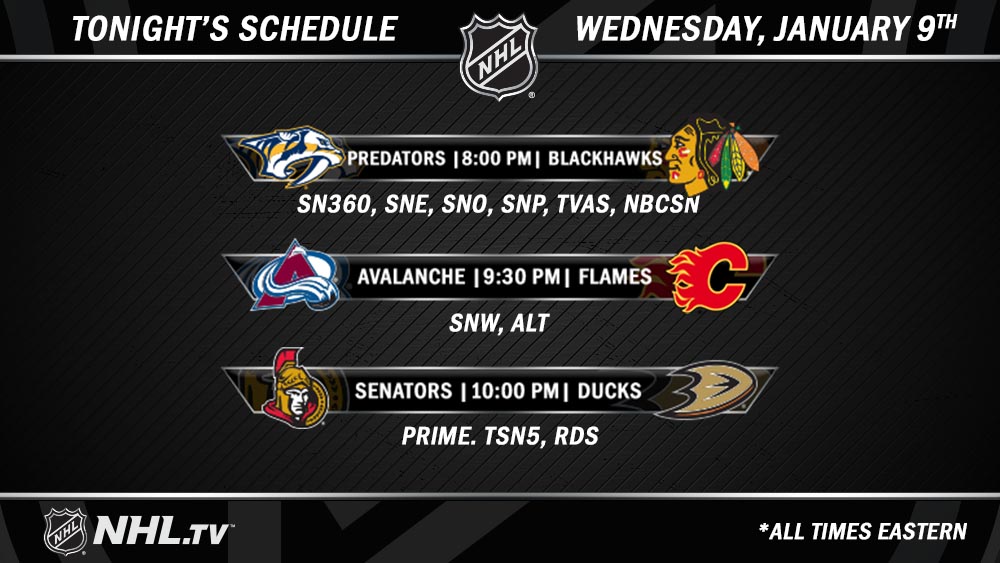