Today is Saturday, January 5th, 2019, and these are your news and notes.

There were seven games on tap yesterday.

An evening filled with hockey — there's nothing quite like it.https://t.co/GfvSSDltw5 pic.twitter.com/3OHE9aWgOE

The Pittsburgh Penguins would go on to shutout the Winnipeg Jets and with the win, they would extend a personal win streak at home to 18 contests against the Jets/Thrashers franchise and this streak dates back to March 24, 2007.

This win streak the second longest since the Anaheim Ducks would have a 25 game win streak at home against the Calgary Flames from April 4, 2007 through April 4, 2017.

The @penguins’ 18-game run is the longest such stretch against one opponent since the Ducks posted an NHL-best 25 consecutive wins against the Flames from April 4, 2004 – April 4, 2017. #NHLStats #WPGvsPIT pic.twitter.com/PKvDLWXAWo

Four different Penguins would all score the goals and Penguins goaltender Matt Murray would turn aside all 33 shots he faced in the contest.

The Detroit Red Wings would take on the Nashville Predators and come away with the 4-3 win in overtime in downtown Detroit at Little Caesars Arena.

Dylan Larkin would score the game-winner in the overtime frame for the Red Wings.

Most overtime goals in a season in NHL history:

#Preds pick up a point but fall in OT to Detroit. Back at it tomorrow night in Montreal.#NSHvsDET pic.twitter.com/uxhBSQ3OMo

Carolina’s phenom Sebastian Aho would net an empty net goal with two seconds left in the contest as well as assisting on Micheal Ferland’s goal in the first period.

Some stats from tonight's W 👇 pic.twitter.com/4cxHakJITP

Aho would play in his 200th NHL game since being drafted with the 35th overall pick in the 2015 NHL Draft.

Sebastian Aho (2nd round, 35th overall) became the sixth player from the 2015 NHL draft class to skate in 200 or more games. The others:

Columbus Blue Jackets goaltender Sergei Bobrovksy would have 13 saves on 16 shot attempts before being pulled in the second period for Joonas Korpisalo who turned aside all of the 14 shots he faced.

The Washington Capitals losing streak would reach three ass they would fall to the Dallas Stars in overtime, losing 2-1.

Stars Tyler Seguin scored in the overtime frame to extend Dallas’ winning streak at home against the Capitals to 17 games.  This win streak dates back to October 8, 1996.

The streak sits two contests shy of the @DallasStars' longest home point streak against one opponent in franchise history.

Tyler Seguin scores twice and Anton Khudobin stands on his head to lead the Stars to a 2-1 OT win over the Capitals. #GoStars pic.twitter.com/UwGFtY4oL3

TXHT has your coverage of the contest between the Washington Capitals and the Dallas Stars at the following link.

The Colorado Avalanche would face off against the NY Rangers last night and would defeat the Rangers by the score of 6-1.

Colorado’s Ryan Graves would score his first NHL goal in this contest in the third period.

Colorado’s trio of Gabe Landeskog, Nathan MacKinnon and Mikko Rantanen would all score a goal in the contest for the fifth time and whenever this trio has scored in the same game, they are 5-0-0.

At the same time, whenever this trio at least collects one point in a game, they have a record of 18-3-5 on the season.

Meanwhile, the @Avalanche also hold a 18-3-5 record when each of the trio collect at least one point in the same contest. #NHLStats #NYRvsCOL pic.twitter.com/MlKjXdK9kC

New York Rangers Alexander Georgiev had 41 saves on 47 shot attempts in this contest.

New Jersey’s Drew Stafford netted the winner in the shootout to give the Devils the 3-2 win over the Arizona Coyotes.

In game number 800, Drew Stafford walks off a winner! @NJDevils take the two points in the desert! #NJDevils pic.twitter.com/n0itfCyCA2

The Vegas Golden Knights would extend their point streak to eight games on the season as well as extending their win streak to five games.

This week there will be two NHL European Games of the Week.

A lot of European talent will be on display in Saturday’s European Game of the Week.

The @NHLFlames, @NHLFlyers, @mnwild and @Senators will be live in primetime across Europe today.

For today’s news, notes, information, and other stats…

Finally in NHL news, the coaches for the 2019 NHL All-Star Game were announced.

Today in the NHL, there are nine games in action. 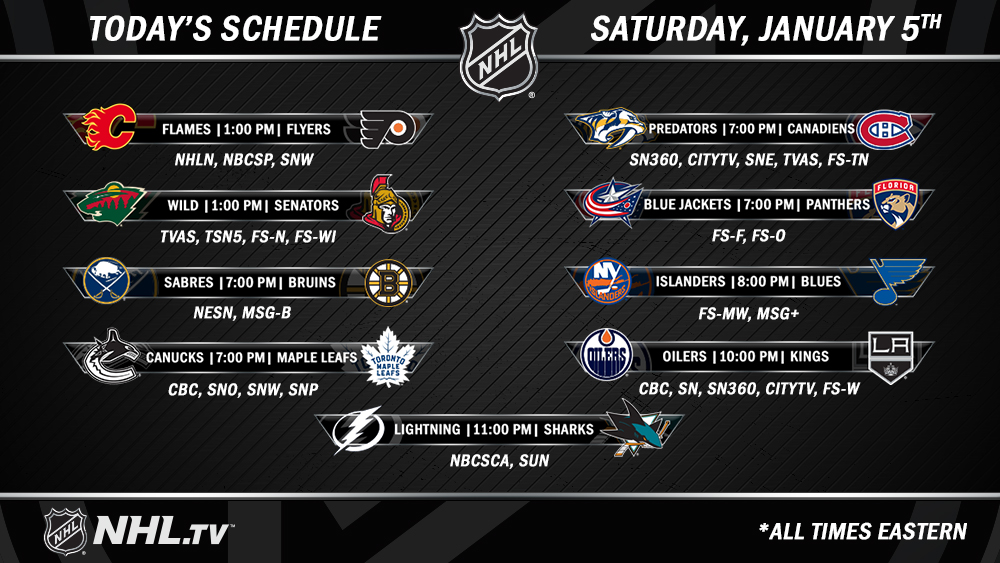 In the NWHL, there are key points on the line when the Buffalo Beauts take on the Boston Pride in this week’s NWHL Twitter Game of the Week at 1:30 p.m., ET.

It's GAME DAY in Buffalo! Key points in the standings on the line! #HockeyTwitter

The medal games of the 2019 World Junior Championships take place later this afternoon.

28 games down, 2 to go. Who leaves Vancouver with hardware? 🥇🥈🥉 #WorldJuniors #REPRESENT

Finally, TXHT has a brand new episode of The Xperience: Hockey Talk, which you can check out at the following link.