There were eight games yesterday.

The Columbus Blue Jackets would go on to defeat the New Jersey Devils yesterday afternoon by the score of 3-0.

The New Jersey Devils would wear their own heritage jerseys in this contest.  The jerseys were worn by the Devils from the 1982-83 season, the first season for the team in New Jersey, until the 1991-92 NHL season.

Blue jackets goaltender Sergei Bobrovsky would register his 14th shutout since the 2016-17 NHL season, the most shutouts in that time frame.

In this contest, the Carolina Hurricanes would wear their Hartford Whalers throwbacks for a Hartford Whalers night last night in Raleigh and would go on to defeat the the Boston Bruins by the score of 5-3.

The jerseys were fresh. The goals were plentiful. The win was awesome.https://t.co/uXHe0Trd9M

In addition to Aho, Teuvo Teravainen would also have a four-point game.

The last time two Hartford Whalers players each collected four or more points in a game was Jan. 18, 1993, when Geoff Sanderson (1-3—4) and Zarley Zalapski (1-3—4) did so against the Winnipeg Jets. #NHLStats #BOSvsCAR https://t.co/CLDtRgcVNi

Carolina would also go on to have two shorthanded goals in this game.

Tonight's Eye on the Numbers 👇 pic.twitter.com/rb4ZaNg9E3

A night to remember pic.twitter.com/kRFdUyiag3

TXHT was live at the game and has your full recap of the contest at the following page.

The Philadelphia Flyers would go on to defeat the New York Rangers yesterday and this would mark the fifth consecutive win the Flyers would have over the Rangers.

Five consecutive wins vs. the Rangers.

Despite the loss in the shootout, the Rangers would still get a point in the standings.

#NYR get a point but lose in the shootout. pic.twitter.com/Qb1bvOccT9

In the Florida Panthers 6-3 win over the Chicago Blackhawks yesterday, Florida’s Jayce Hawryluk would score the first two goals of his NHL career.

Florida has won four out of their last five contests.

Jayce Hawryluk scored the first two goals of his NHL career to help the @FlaPanthers improve to 4-1-0 in their last five games. #NHLStats #FLAvsCHI pic.twitter.com/EosS4k1o3f

In addition to Hawryluk having two goals, Panthers defenceman Mackenzie Wagner would also have a two point performance.  Wagner would have two assists in this contest.  This would be the first multi-point contest for both players.

Detroit’s Dylan Larkin would extend his point streak to a career-high of 11 contests.  This makes it the longest such streak since Henrik Zetterberg had an 11 game run during the 2010-11 season.

Toronto’s Patrick Marleau would play in his 1,612th regular season NHL game, tying Hall of Famer Ray Bourque for the tenth most in NHL history.

Patrick Marleau of the @MapleLeafs is skating in the 1,612th regular-season game of his NHL career and tied Ray Bourque for 10th place on the League’s all-time list.#NHLStats: https://t.co/rhEHsIQD3M #DETvsTOR pic.twitter.com/liOC5sEjMb

Detroit’s Trevor Daley would go on to play in his 1,000th NHL career contest last night in this game.

With the Islanders 3-1 win at the Dallas Stars last night, the New York Islanders would finish off their road trip going into the holiday break with a 3-1-0 record.

#Isles finish off a 4-game road trip with a win in Dallas. https://t.co/LYEXX7vL4Y

The Los Angeles Kings won their 36th regular season overtime game since the 3-on-3 overtime format was introduced in the 2015-16 season when the Kings go on to defeat the Vegas Golden Knights 4-3.

The @LAKings lead the NHL with 36 regular-season overtime goals since the 3-on-3 format was introduced in 2015-16. #NHLStats #LAKvsVGK pic.twitter.com/1Af4LkuRVZ

This would be the Vegas Golden Knights second consecutive overtime loss.

The Arizona Coyotes would go on to defeat the San Jose Sharks 4-3.

Not a bad way to head into the break. pic.twitter.com/f2N74fDpbf

With Joe Thornton’s assist in the first period on Tim Heed’s goal, Thornton would register his 1,041st career assist.  He passed Marcel Dionne for tenth place all time in the NHL.  He is now eight assists shy on his career from tying Gordie Howe for ninth place.

And this amazing story continues for Joe Thornton. 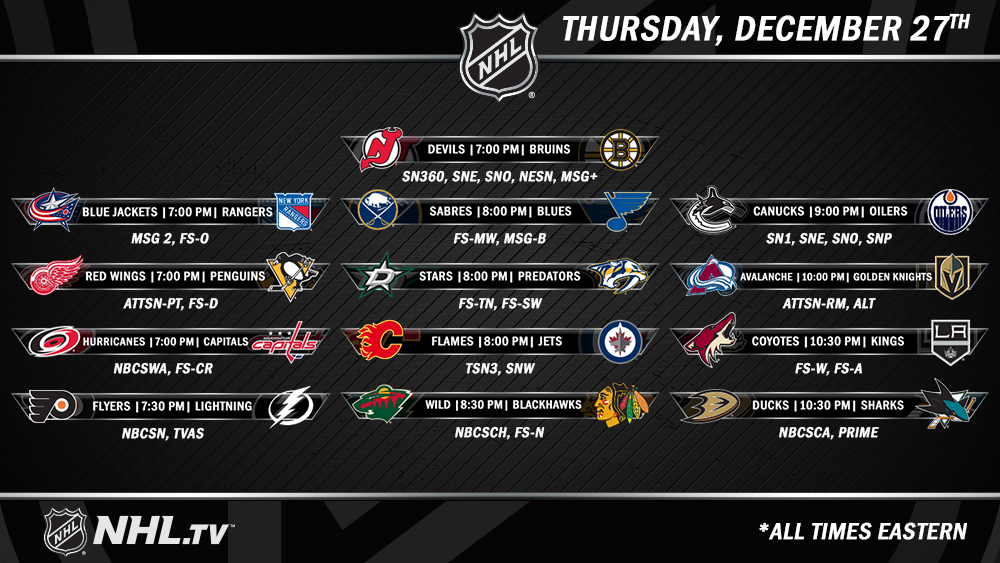