There were seven contests across the NHL yesterday…

The Vegas Golden Knights would defeat the New York Rangers in overtime yesterday afternoon with Vegas’ Alex Tuch would score the game-winner at 2:11 in the overtime frame.

we never thought that it’d be simple but

we found a way

Carolina Hurricanes G Petr Mrazek would go on to have a 23 save performance to seal the shutout victory for the Hurricanes.

Some numbers from today's game 👇 pic.twitter.com/LO922kQdzt

The Calgary Flames would score a shorthanded goal for the third consecutive game for the eighth time in franchise history and would go on to defeat the St. Louis Blues 7-2 in St. Louis last night.

The @NHLFlames have scored a shorthanded goal in three or more consecutive games for the eighth time in franchise history. #NHLStats pic.twitter.com/2TLsYmv5d8

Buffalo’s Jack Eichel now has five regular-season games of at least four points before his 23rd birthday and joins four other Buffalo Sabres for this mark in franchise history.

Most regular-season games with 4+ points before 23rd birthday, @BuffaloSabres history:

San Jose Sharks D Brent Burns became the 38th player in League history to be listed as a defenceman to register at least 600 points in the contest against the Chicago Blackhawks.

Brent Burns of the @SanJoseSharks is the 38th player in NHL history listed as a defenseman to reach the 600-point milestone.#NHLStats: https://t.co/czbFpeGZP2 #SJSvsCHI pic.twitter.com/PMttnkyqWU

Winnipeg’s Mark Scheifele would score the game-winner in the overtime frame with 42 seconds left to seal the 5-4 win over the Tampa Bay Lightning.

Connor McDavid of the @EdmontonOilers has collected at least one point in nine consecutive appearances (6-10—16) and is third in the NHL with 19-30—49 this season (33 GP). #NHLStats #EDMvsVAN pic.twitter.com/4W8kL6aXvF

Vancouver’s rookie Elias Pettersson extended his point streak to seven games and now leads all rookies with 35 points on the season in 30 games played.

Elias Pettersson of the @Canucks extended his point streak to seven games (4-9—13) and leads all rookies with 17-18—35 overall this season (30 GP). #NHLStats #EDMvsVAN pic.twitter.com/lPbBy6KawY

There are five games taking place tonight in the NHL… 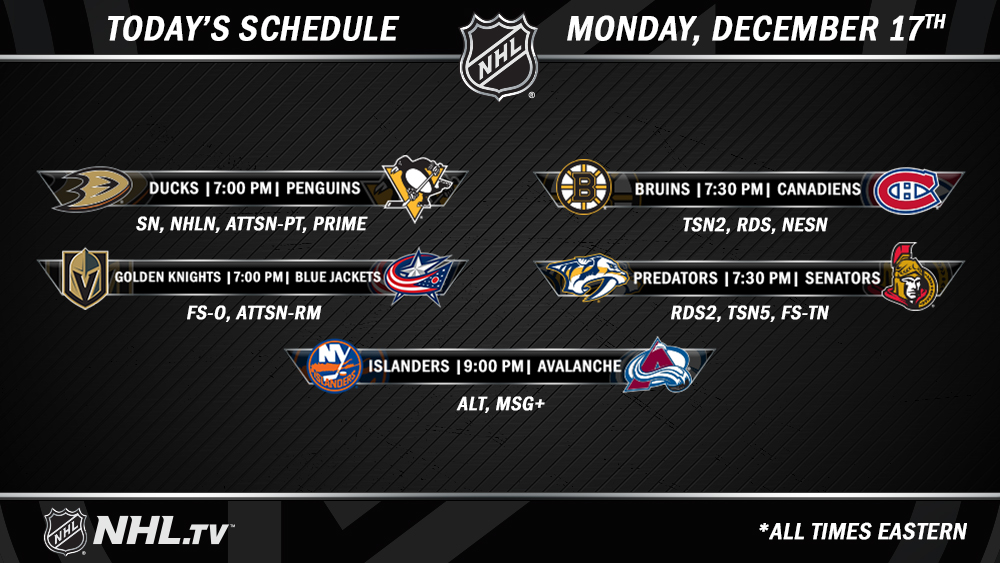 The NHL today announced the Three Stars of the Week for the week ending December 16th.

⭐@ovi8 scored 7 goals in 3 games, highlighted by back-to-back hat tricks, to extend his career-high point streak to 14 games and his goal streak to 6 contests, one shy of his personal best. #NHLStats pic.twitter.com/GEe8FzhvEf

The Philadelphia Flyers announced earlier today that Head Coach Dave Hakstol has been relieved of his duties effective immediately and that Scott Gordon will be the head coach on an interim basis.

OFFICIAL: The #Flyers have relieved Dave Hakstol of his duties as head coach. Scott Gordon will serve as head coach on an interim basis. https://t.co/6ecCm6Wk7X pic.twitter.com/Ie6n5YdunW