Today is Sunday, December 2nd, 2018, and these are your news and notes…

There were 12 games that took place yesterday.

In the NHL European Game of the Week…

Erik Karlsson returns to Ottawa for the first time in the NHL European Game of the Week: @SanJoseSharks at @Senators

The Ottawa Senators would defeat the San Jose Sharks 6-2 yesterday afternoon.  This matchup would mark the return of Sharks D Erik Karlsson to Ottawa for the first time since the offseason trade.

Ottawa’s Thomas Chabot recorded his 30th point on the season, making him the third player to get to 30 points for a Senator defenceman in franchise history.

Ottawa’s Ben Harpur would score his first NHL career goal in the win for the Senators.

“It was a lot of fun out there today.”

Mikkel Boedker and other #Sens players speak to media after beating the San Jose Sharks 6-2 at @CdnTireCtr this afternoon. pic.twitter.com/kZPCmcekmj

The New York Islanders would play their first contest in the newly renovated Nassau Coliseum last night of the season.

Tonight is the night. #Isles pic.twitter.com/6sgWjVxBkk

Columbus Blue Jackets Cam Atkinson would extend his point streak to a career-best 10 contests and is only three games shy of tying the all-time franchise record set by Ryan Johansen in the 2014-15 season.

Cam Atkinson extended his point streak to career-best 10 games and now trails only Ryan Johansen (13 GP in 2014-15) for the longest such run in @BlueJacketsNHL franchise history. #NHLStats #CBJvsNYI pic.twitter.com/R7z3lU2lLR

In his return to action, Montreal Canadiens captain Shea Weber would score twice to help lift the Canadiens past the New York Rangers with a 5-2 win.

It wasn't the first time Shea Weber scored two goals in a single game with the Canadiens, but last night was extra sweet!

It's great to have you back, Captain!

ICYMI: Shea Weber and the Canadiens got back in the wins column after beating the New York Rangers 5-2 on Saturday night at the Bell Centre.

Brayden Point of the Tampa Bay Lightning score the 15th game winner, the most in the NHL since the 2017-18 season.

Tampa Bay would go on to win the contest over the Florida Panthers 5-4 in overtime.

Mark Schiefele would score the fifth regular-season overtime goal, the most in Winnipeg Jets franchise history with the Jets 4-3 win over the New Jersey Devils last night.

Coach Sullivan: "Our 4th line has been really good. Sid's line was good. We have to find a way to get more production from the middle of the lineup… I think we beat ourselves with the types of mistakes we made. We're all responsible."

The Toronto Maple Leafs would win their 10th road contest out of the 13 played thus far on the season with the 5-3 win over the Minnesota Wild.

The @MapleLeafs have won 10 of their first 13 road games to begin a season for the first time in franchise history. #NHLStats #TORvsMIN pic.twitter.com/FWfyIXKdFi

Auston Matthews of the @MapleLeafs became the sixth different NHL player in the last 30 years to average at least one goal per game in a season through games played Dec. 1 (min. 10 GP). #NHLStats pic.twitter.com/VC8EfAFCE2

TXHT’s Toronto Maple Leafs contributor Steve Gardiner has your recap of the contest between the Maple Leafs and the Minnesota Wild at the following page.

The Nashville Predators would score three goals in the first five minutes of the contest and would go on to defeat the Chicago Blackhawks 5-2.

Saturday marked the first time in @PredsNHL franchise history in which the club has scored three goals in the opening five minutes of a regular-season contest. #NHLStats #CHIvsNSH pic.twitter.com/gjOkPdVB8X

There were six different players that scored for the Arizona Coyotes when they would go on to rout the St. Louis Blues by the score of 6-1.

In the NWHL contest from last night, the Connecticut Whale took on the Boston Pride in the NWHL Twitter Game of the Week.

The Boston Pride would halt the Minnesota Whitecaps win streak at six games with the Pride’s 5-1 win at TRIA Rink last night.

RECAP: @thebostonpride halt the @WhitecapsHockey win streak at six with a decisive 5-1 win, powered by a pair of goals from Gigi Marvin.

The contest would be scoreless for the first 17 minutes until  Mallory Souliotis scoredher first NWHL goal thanks to an assist from Amanda Pelkey to give the Pride the 1-0 lead.

Jillian Dempsey would make the contest 2-0 before the end of the first period.

Amanda Boulier would score the lone goal for the Whitecaps in the contest in the second period.

The Boston Pride’s Hayley Skarupa would score on the power-play with 35 seconds left in the second period to give the Pride the 3-1 lead.

In the third period Gigi Marvin would score both goals to give the Pride cement the 5-1 lead.

The Minnesota Whitecaps look to take the win from the Boston Pride today at in front of another sold-out crowd at 2 p.m., CT and the game can be seen on NWHL.zone/watch

The Metropolitan Riveters take on the Connecticut Whale today at 3:30pm, ET from the UPMC Lemieux Sports Complex in Pittsburgh.

TXHT’s Christopher Vasilas has your preview of the contest between the Riveters and the Whale at the following page.

Will @WhitecapsHockey rebound or will @TheBostonPride take the weekend sweep?

The @Riveters and @CTWhale_NWHL have had two epic battles so far this season. Don't miss the third, tomorrow in Pittsburgh!

The Toronto Maple Leafs and William Nylander came to terms on a six-year deal worth $41.77M deal, ending Nylander’s holdout.

In actual dollars received, nothing to do with cap hits or AAVs, William Nylander is receiving $41.77M over six years, which averages $6.96M per year.

The NHL announced yesterday afternoon the NHL Three Stars of the Month.

The NHL also announced today that the Buffalo Sabres Rasmus Dahlin has been named the NHL Rookie of the Month for the Month of November.

Rasmus Dahlin (@BuffaloSabres), who topped first-year blueliners and ranked fourth among all rookies with 1-9—10 in 15 games, has been named the NHL’s “Rookie of the Month” for November. https://t.co/G3zSUznfL4 #NHLStats pic.twitter.com/6PByvjPNsa

Today there are six contests on the schedule… 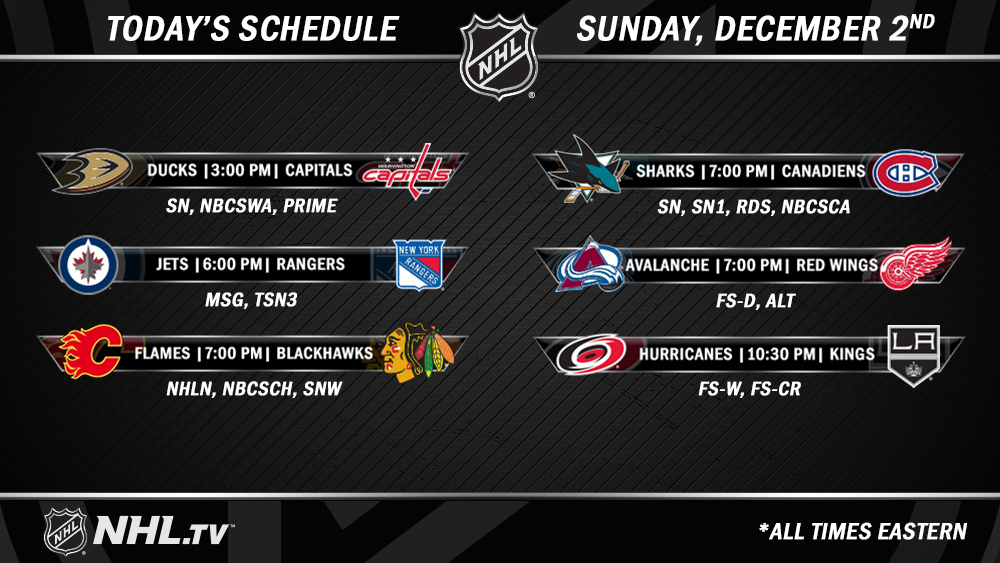