A quick recap of yesterday’s contests:

Dallas Stars Jason Spezza would collect his 900th career point in the Stars win over the Islanders yesterday.  His 900th point would be an assist on Roope Hintz’s first career NHL goal.

Jason Spezza tallies his 900th career point with his assist on Hintz's first NHL goal. Congrats to both Spezza and Hintz! #GoStars pic.twitter.com/ydyR8JKO0p

In the Carolina Hurricanes one-goal win over the New Jersey Devils, the Hurricanes would score two goals in the span of eight seconds to seal the win.

The franchise mark is two goals in six seconds, which was set on March 28, 1987, when the Hartford Whalers did it against the Pittsburgh Penguins.

The @NHLCanes scored twice in a span of eight seconds.

The franchise record for fastest two goals is six seconds, a mark set by the Hartford Whalers on March 28, 1987 vs. PIT. https://t.co/TjJPF3T96W #NHLStats #NJDvsCAR pic.twitter.com/4owOmXwtWr

The Colorado Avalanche would get their 1,000th win as a franchise in the overtime frame with the win over the Anaheim Ducks last night.

Here’s to many, many more. #GoAvsGo #GoAvsGo pic.twitter.com/ZzajpXGdJE

Colorado’s Mikko Rantanen also became the eighth player in the franchise history or the Quebec Nordiques/Colorado Avalanche to have 30 points in 20 games played with the club last night.

Mikko Rantanen is the eighth different player in @Avalanche / Nordiques franchise history to reach the 30-point mark in the first 20 team games in a season. #NHLStats #COLvsANA pic.twitter.com/ulQzY4N7Bg

The Vegas Golden Knights went on to double up the Edmonton Oilers with a 6-3 win.

Marc-Andre Fleury would go on to have 29 saves in the win.

did what we wanted to do last night 👌 pic.twitter.com/8Mim3maRoK

There are nine games on the docket tonight across the NHL. 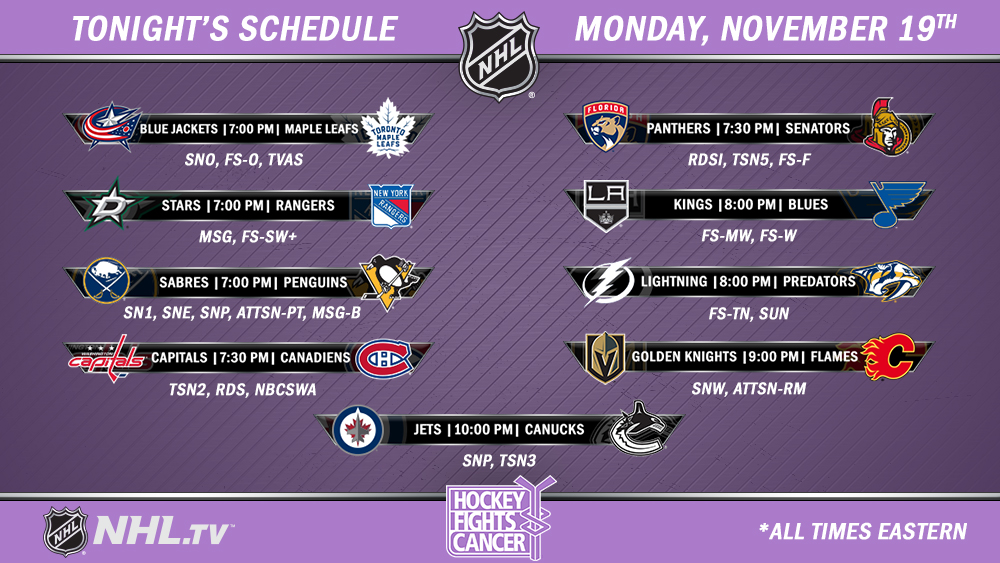 In the NWHL, there were two contests yesterday.

RECAP: Hayley Scamurra and Maddie Elia were back at it, teaming up for seven points as the @BuffaloBeauts topped @TheBostonPride, 5-2.

RECAP: The @CTWhale_NWHL picked up their first win of the season, a 2-1 victory over the @Riveters, on a late goal from Shannon Doyle.

TXHT’s Christopher Vasilas has your recap of the contest between the Connecticut Whale and the Metropolitan Riveters at the following link.

The NHL announced the Three Stars of the Week earlier today.

⭐ @CamAtkinson13 paced the NHL with 8 points last week, including his fifth career three-goal game to tie Rick Nash for the most hat tricks in @BlueJacketsNHL history. #NHLStats pic.twitter.com/R5thMSiZZG

⭐⭐ Corey Crawford went 2-0-1 for the @NHLBlackhawks last week including his 24th career shutout in a 1-0 W vs. STL on Nov. 14. #NHLStats pic.twitter.com/cGWwMxgs3Z

⭐⭐⭐@jpav8 collected multiple points in all three appearances for the @SanJoseSharks last week while sharing the League lead with 5 goals. He ranks tied for fourth in the NHL with 13 goals in 2018-19 (13-3—16). #NHLStats pic.twitter.com/KWZumLagBm

She was named @EcnVeda NWHL Co-Player of the Week! pic.twitter.com/DQIoSqidbR

A weekend so good we couldn't pick just one @EcnVeda NWHL Player of the Week. @meeriraisanen came up huge for the @CTWhale_NWHL in their first victory, and @HScamurra picked up four points in a win for the @BuffaloBeauts!

You can watch TXHT tomorrow night at 8 p.m. ET on Twitch and Facebook Live.